News from the University of Dayton: 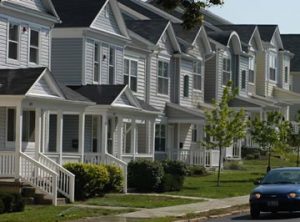 The University of Dayton is investing $17 million during the next two years to build and upgrade housing in its distinctive student neighborhoods, home to most of the school’s juniors and seniors.

Beth Keyes, vice president for facilities and campus operations, said that between now and August, 2017, the University will complete a $6 million renovation of the Garden Apartments on the south side of East Stewart Street, build $5 million of new infill housing and construct a new $6 million mixed-use facility on the site of the McGinnis Center in the heart of the south student neighborhood.

“Our student neighborhood is a real community,” Keyes said. “Students want to live there because the experience is at the heart of learning and living in community together and exemplifies what they most love about the University of Dayton.”

Construction already has started on eight five-bedroom, three-bath houses on several lots at the east end of Stonemill Street. Walls are already up on the first of those houses — the “I Love UD” house. Gifts from more than 800 alumni and friends of the University are helping to build it and the names of the donors are being incorporated in the construction.

The new housing will be certified green, with features such as insulation, energy-efficient furnaces and appliances, tankless water heaters and airtight windows.

Also underway is a $6 million renovation to five buildings of the Garden Apartments located on the south side of East Stewart Street, with completion expected next summer.

Construction is expected to begin next summer on a new configuration of townhouses on four lots on Kiefaber Street, allowing for a greater number of units on the lots. Rather than face the street, the 10 five-person homes will cluster around a green, pedestrian space and create a mini-neighborhood Keyes expects will be very popular with students.

Next year, Keyes also expects to start construction on a $6 million multi-use facility on the site of the 90-year old McGinnis Center, which will be removed. The current concept is for a structure similar in design to the Caldwell Street apartments. It’s envisioned to provide housing for 96 students on three floors above ground-floor multipurpose space for student services and meetings, including student worship gatherings.

The University also will continue to consider acquisition of privately owned properties in the student neighborhoods as they become available and if they fit into the overall housing strategy, Keyes said.

The $17 million program is just the latest example of the University’s continuous investment in student living, which during the last decade has resulted in more than $150 million in new construction and renovations to more than 439 residential houses, duplexes, apartment buildings and high-density dormitories.

Nearly 90 percent of undergraduates live on campus in housing ranging from traditional residence halls and apartments to lofts and single-family homes with porches.

For more information, contact Cilla Shindell, director of media relations, at 937-229-3257 or shindell@udayton.edu.