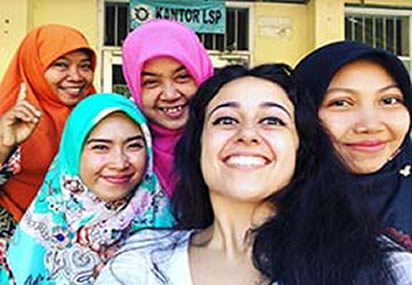 “When I’m older, I want to join the Peace Corps.”

Her uncle’s stories of the Peace Corps, living in a faraway place called Togo (West Africa) among people very different from him yet who became lifelong friends, had captured the imagination of Alice Potter ’18, a precocious 4-year-old. It was in her blood.

Potter and her family grew up in California while her father worked as a software engineer, and they also spent years living abroad, in Italy, Germany and France. Returning to the United States for college was never part of Potter’s plan; however, her mother did an internet search for colleges in the U.S. “with a good record of acceptance and graduation rates,” and Chaminade University of Honolulu popped up. The positive reviews about Chaminade’s student-to-faculty ratio, affordable tuition, overall quality, coupled with its location and Hawai‘i’s mild weather, all sounded very appealing. Her mother told her that if she got in, she would be going to the Marianist university. And to Potter’s surprise, the acceptance letter came. She was anxious to be going back to the U.S. and of all places the most remote 50th state.

Intimidated at first, she soon made new friends and began thriving in Chaminade’s customized learning experience. She also shared its values of serving the community by volunteering at the  Waikīkī Aquarium. Aside from her studies, Potter also fell in love with Hawai‘i’s marine life and flora and enjoyed learning about the islands’ rich history. “Never before had I encountered a place so profoundly connected to its people like in Hawai‘i,” she says. [Read More]