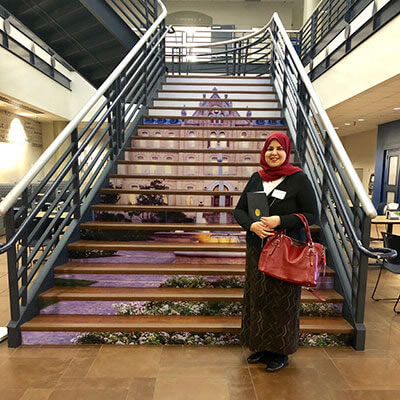 Christmas Day, 2018. A couple of bags in hand, Shaima Khalaf flew into San Antonio to start a new life as a student in the Master of Arts in English Literature and Language program at St. Mary’s University.

For 20 years, Khalaf had been a schoolteacher in Iraq, caring also full time for her mother suffering from Alzheimer’s.

Earlier in 2018, Khalaf taught an 11-year-old student who was “playful, but wasn’t keeping up with homework,” she said.

Khalaf’s colleagues warned her not to impede the student’s academic progress — to just pass him — but her strong principles didn’t allow her to act immorally.

After a tense meeting with the student’s father in the principal’s office at her school, Khalaf learned of the boy’s family connection to a violent militia, which soon issued death threats on her own family.

“For six months, I was scared for my life,” Khalaf said. “I had to hire a special driver to take me places and then go straight home.”

Already having a master’s degree in English and American literature from University of Baghdad — counting Jane Austen and Emily Brontë among her favorite writers — Khalaf researched similar programs in San Antonio, where her sister and brother-in-law were studying at St. Mary’s.

“They wanted me to come sooner than later,” so she emailed Mary Lynne Gasaway Hill, Ph.D., Graduate Program Director and Professor of English Literature and Language.

Hill became Khalaf’s advocate, doing whatever she could to ease her admission to the University as Khalaf prepared paperwork for her visa.

Hill said she and Khalaf “emailed back and forth for nearly six months, troubleshooting various obstacles, discovering what her literary interests were and learning about each other.” [Read More]