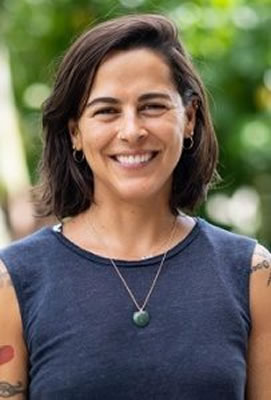 Dr. Lupita Ruiz-Jones, Assistant Professor of Environmental Science at Chaminade University, wants students to plan their careers with intention, so they end up doing work they love.

The key, she says, is pursuing and doing the things you are interested in, even when you don’t know where they will lead. After all, that’s what worked for her.

She was in high school in Santa Fe, New Mexico, when she learned about Chaminade University at a college fair. “I don’t think I ever would have heard of Chaminade except for that booth.”

Seeking out opportunities and going after them has been a life-long pattern for Ruiz-Jones. It’s especially impressive when you learn she was raised by parents who didn’t complete college in a family without the trappings of success.

Her mother was always supportive but struggled with bipolar disorder. Ruiz-Jones’ father went to prison when she was 12, which she says had a significant impact on her. “I really appreciated the ability to choose where I put my attention,” she says.

In one of her first classes, Dr. Gail Grabowsky, now dean of the School of Natural Sciences and Mathematics, told the students it was great they were there. “She told us, ‘You’re going to love what you do, you’ll make an impact, but you’re not going to become rich.’” [Read More]