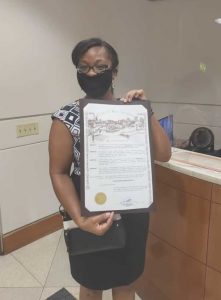 On June 13, 2020, I attended a community meeting at the Refuge Church of Our Lord in San Antonio. San Antonio Mayor Ron Nirenberg’s appearance at this meeting was a complete surprise to all attendees. As a young Black woman born and raised in Texas, it became an important tradition for me to honor the significance of June 19, 1865, once I learned about this day as a teenager.

As a passionate advocate for African American studies, Black cultural heritage and family lineage, I feel it’s imperative for San Antonio to share the importance of cultural moments for its Black residents by making citywide stances such as acknowledging Juneteenth as a paid holiday, similar to Fiesta’s Battle of Flowers commemoration.

During the meeting, I was inspired to stand and make my motion to the mayor to request that Juneteenth be a recognized holiday. He responded by saying he was unaware that it wasn’t already a recognized day. Then he said, “I will make this happen.”

Days later, I heard that the mayor was taking it to our city council to finalize the proclamation, which was officially announced on June 18.

My experience at St. Mary’s University afforded me the opportunity toward self-discovery with personal and professional development, and a high regard for impactful community service. I’ll always credit my alma mater for helping me build necessary endurance to achieve real social change.